I imported her in late summer 2009 and after some good meals during the autumn, a good size and weight, I decided to breed her with my pastel male to try to get a silver streak.

The female made a shed (15. april 2010). I did not see the ovulation by myself but she began to take weight. In the middle of may it was sure, she was pregnant... but the problem was just beginning...

55 days after her last shed, there was still no eggs... I seek on the web and in all books I found to find out what was the limit date for laying eggs after the pre-layed shed and I decided to bring her at my school where I could use a echo-doppler to see what was going on. I have unfortunately no pictures of the echo results but it was evident that the first egg was "joined" to the muscularis in the oviduct of the female. Then I called the vet to take an appointment as soon as possible. We met the 8 june 2010. He made an Rx where we can also see a more opaque area on the first egg (first egg starting from the tail). He kept the female one day and made the operation the next day. When he called me back, he give me the 9 eggs (but they were all flat and I couldn't do anything with them) ...

That was not the most important. The female was alive and that was mattered to me.

She received an ATB treatment with Marbofloxacin (Marbocyl) 0.4ml per day during 5 days intra muscular from the 9-13 june 2010.

The female began to get better and after some weeks I removed the stiches my self (19 july 2010). 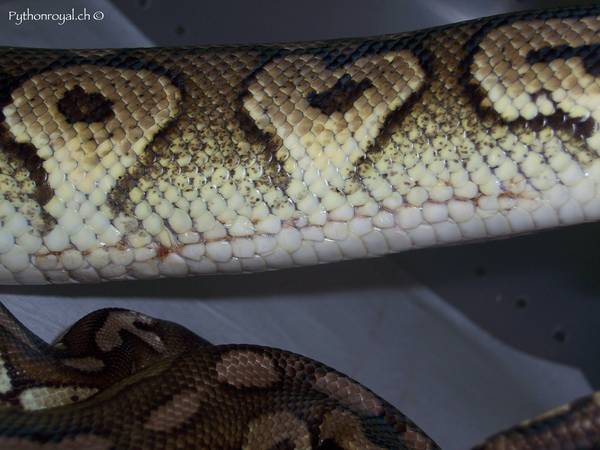 She ate again an adult african rodent (Mastomys) in the middle of august (11. august 2010). 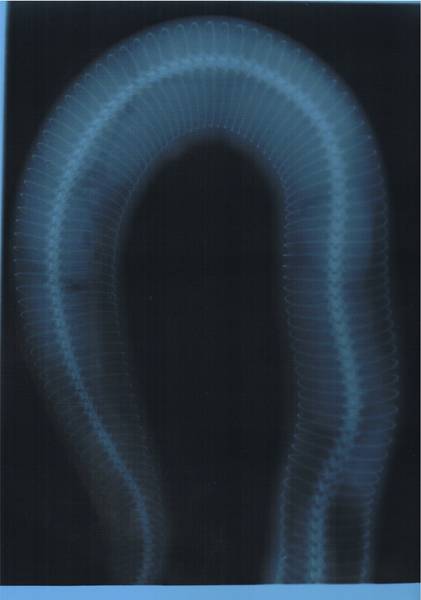